Today, Gothamist highlighted the ad Pamela Geller most recently wants to put on New York subways. It’s not the kind of thing I want to post on my blog, but have a look here to know just what we’re talking about. And, as Gothamist also invites you to do, please compare it to the “pro-Palestinian” ad that a few people were so enraged about appearing, also, on the subway.

Maybe it would actually be a good thing if Geller’s thing went up and appeared next to this. We’d finally a get a crystal clear picture of two points of view on the intractable conflict–and not in the way she hoped for.

There’s a standard speech I give when people ask me about the Middle East, and in particular the Arab-Israeli conflict. I have shied away from writing on the subject in this blog for some time — it often seems that all the arguments have already been made, and every discussion devolves into a screaming match that brings out the worst of the blogosphere, which is tiresome.

But today, in light of the news and a recent musical discovery, I gently put forth the crux of my standard speech, which is: From a cultural perspective, it doesn’t have to be this way. The division between Arab and Jew is an inorganic one. The precolonial Middle East and eastern Mediterranean were dazzlingly diverse. Major cities contained the three “religions of the book” in equal parts, and among these were many sects. But identities had as much to do with the city one called home — Damascus, Aleppo, Baghdad, Istanbul, Salonica, Jerusalem — as they did one’s religion. (I have written about this more here.)

And yet, the mainstream media constantly tells us or implies that the “Arab-Jewish” conflict is an age-old one. Not only is this inaccurate — it is a 20th century phenomenon — it’s a confusion of terms: Arab and Jewish are not exclusive categories. They are used to describe ethnicity and, in the case of the latter, ethnicity and/or religion that may overlap with many different ethnicities. One may take issue with the use of the terms in one way or another, but the thing is, we continue to have evidence that one may be both Arab and Jewish.

Take Israeli-Yemeni singer Ravid Kahalani, whose music I just found out about.

There. You. Go. (The link is from a February podcast on Kahalani by The World’s Marco Werman — I can never seem to beat him to an international music discovery.)

I could write a whole essay about what I like about Kahalani’s music, which a friend introduced me to a couple of days ago. There’s the lovely pentatonic scale; the combination of oud and darbakeh (Arabic drum); the evidence in his voice of his background as a synagogue cantor; that rolling trance-like feel to his rhythms that reminds me of Ali Farka Touré and makes me picture the desert. His album is called Yemen Blues.

Anyway. To bring my speech back to current events. I woke today to images of unarmed marchers setting out from Lebanon, Syria, Gaza and the West Bank, attempting to to cross the border into Israel. Troops of the latter opened fire, killing at least a dozen and injuring scores.  Many of the protestors were reportedly Palestinian refugees — there are nearly 5 million of them in Jordan, Lebanon, Syria and the Palestinian territories.

In my standard speech, I make my point about identity because I think, however one evaluates incidents such as these, it is important to remember that they are a result of political grievances that have their roots in the events of the last 100 years. (Specifically, many of those Palestinian refugees continue to carry the keys to the homes their families were kicked out of 63 years ago when Europeans escaping persecution wanted a place to live.) Age-old religious animosity does not really factor in.

I certainly do not have Kahalani’s permission to entangle his music in this argument, but as I sit back and listen to him sing “Um min al Yaman” (Arabic for Mother is from Yemen), I can’t help thinking — and hoping — that alive out there still, is another vision for the Middle East.

Everyone should read Nelson Mandela’s autobiography! In fact, you probably already have. But I’m a little late to the game and just did it, finally. Long Walk to Freedom is deeply inspiring. It’s the story of an unbelievably strong man who remained a freedom fighter in every aspect of his life, whether he was free or jailed, whether he was trying to dismantle apartheid or simply trying to get Robben Island’s prisoners access to reading materials. More than that, though, the book is a wonderful model for anyone fighting for a just cause against overwhelming odds. Mandela is a master at balancing long- and short-term goals, making smart compromises, and not letting emotion supersede tactics. Perhaps the most moving part of the whole book is Mandela’s willingness, in the end, to partner — in the service of the greater good — with the same people who stole almost everything of personal meaning from his life.

For these reasons, Mandela’s book has lessons far beyond the anti-apartheid movement. I can think of applications from the United States to the Middle East to China and Tibet. Luckily for us, he offers up many quotable passages that provide food for thought. Here are my seven favorite, with a note or two on how I think they have broader applications. END_OF_DOCUMENT_TOKEN_TO_BE_REPLACED

Following a smear campaign by pro-Israel groups, Charles W. Freeman, a former U.S. diplomat, has been forced to withdraw from being nominated to be the head of the National Intelligence Council. Article here.

This is really disturbing, and seems to be yet another event proving Harvard professors’ Mearsheimer and Walt’s thesis of an ideologically driven Israel Lobby playing a disproportionate role in our foreign policy. Even when it would be better for America, better for the Middle East and even better for the Israeli people, our government stupidly aligns itself with a particular right-wing, Israel-is-the-key-to-all-Middle-East-progress ideology. It’s affecetd all levels of our discourse. This is why a number of Palestinians have told me it is actually much easier to criticize Israeli policy in Israel than it is in the United States.

The worst thing about this is that it shows Obama may not be deeply reevaluating our troubling, uncritical and constant support for all things Israeli — or at least all things that Israel’s American neocon, evangelical and right-wing Jewish lobbyists tell us are pro-Israeli.

As Freeman put it:

It is apparent that we Americans cannot any longer conduct a serious public discussion or exercise independent judgment about matters of great importance to our country as well as to our allies and friends.

A couple of weeks ago, I wrote a story for a class on the situation of schools in the Gaza strip. I was astounded to find how dire the situation is there for schoolkids.

“There is a great deal of difficulty concentrating because there’s a lot of trauma,” said Saahir Lone, a New York-based employee of the United Nations Relief and Works Agency for Palestine Refugees in the Near East (UNRWA), which runs 221 schools for 200,000 children in Gaza. “It will be some time before some kind of routine can be established.”

Gaza’s educational system—already in a dire state before the recent hostilities—is all but crippled. Israel’s 22-day assault on Gaza killed 400 children and injured many, according to the International Committee of the Red Cross. With empty chairs haunting classrooms, schools damaged and an estimated 14 percent of all buildings in Gaza destroyed, the United Nations says that there is no easy way to establish a normal learning environment for students. Read more.

Travel the Arab world a bit, and you’ll find it’s hard for people to agree on much from one country to another. But whether it’s Palestinians in Dubai, Syrians, Lebanese or Chadians, there’s one point on which everyone seems to find common ground: Muammar Qaddafi, the de facto leader of the Socialist People’s Libyan Arab Jamahiriya, is a freakin’ crackpot.

Crackpot, despot and buffoon he may be. But I have to say, his op-ed in The New York Times yesterday arguing for a one-state solution in Israel and Palestine was well put. With his track record, Qaddafi’s claim of interest in peace is preposterous, and it will be easy for detractors to void his argument based on the colonel’s utter lack of credibility. (In that sense, I think it’s interesting that the Times chose to print the one-state argument under Qaddafi’s byline. There are far more credible and respectable people saying the exact same thing. Makes it look like it’s only the opinion of a maniac.) END_OF_DOCUMENT_TOKEN_TO_BE_REPLACED

Thanks to my friend, posting as Thawrat Hub (Arabic for Revolution of Love), I don’t have to scour the Internet for good reading on the Gaza crisis. Thawrat Hub is taking care of that for me. Check out Gaza in my heart, and on my mind for steady servings of good reportage, opinions and Thawrat Hub’s own reflections.

Just wanted to share a pic from today to show the world that there are some Americans who really care about what is going on in Palestine. We marched from Times Square to Columbus Circle. It was peaceful and bitterly cold. Someone told me there were 20,000 people there, and I could believe it. 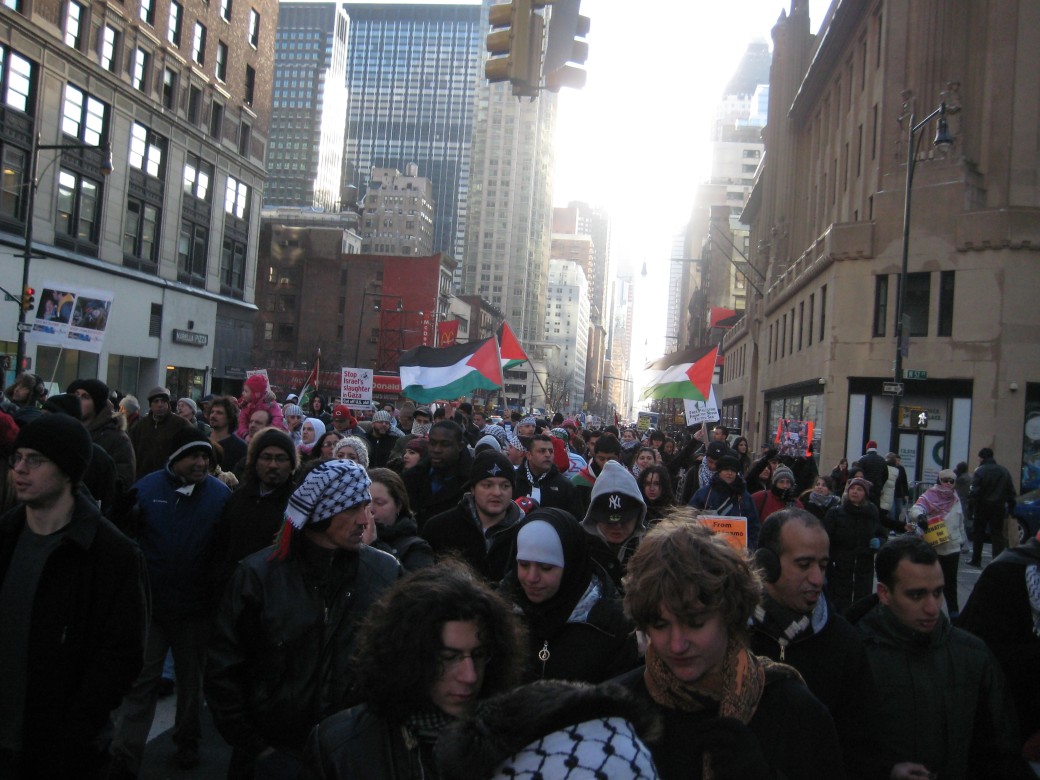 If Jon Stewart was a total partisan about anything, he wouldn’t be doing his job. So I expect him to be more cynical and keep a better critical distance from the bombardment of Gaza than I have been able to do. (But hey, I don’t think I’m doing such a bad job myself!)

Still, it was a huge relief to see him joking about the Israeli incursion in a way that made all the Israel apologists on TV look like dum-dums. (They tend to be much more annoying than Israel apologists in real life, because their position on the matter seems much more a political stunt than actual conviction.)

My favorite part of Monday’s show: New York mayor Michael Bloomberg asks, If a crazy neighbor was shouting through your door threatening to kill you, wouldn’t you want the NYPD to send all available resources, not just a single cop?

“That depends,” says Stewart, “if I was forcing that person to live in my hallway and pass through a checkpoint every time he needed to take a shit.”