Between November 10 and December 5, I went on a road trip that took me from Dar es Salaam, Tanzania to Bujumbura, Burundi – via Nairobi, Kisumu, Kampala and Kigali. Hitting all five countries in the East African Community (EAC) in four weeks via bus is an endeavor I can only describe as ridiculous. I estimate that I logged more than 75 hours in buses; if someone could calculate the mileage for me, that would be awesome. (This is not counting at least 45 hours of trains and automobiles I undertook at the end of October, going from Dar es Salaam to Tanga to Mombasa, and then from Mombasa to Nairobi, and then back to Dar – see previous posts.)

For some reason, I’m going to start with Burundi, a country where I only spent three nights and didn’t do any real reporting. Burundi was basically my journey’s terminus, and maybe for that reason I can get a little sentimental about it. But for whatever reason, this beautiful, war-torn little country looms large in my mind.

I have to admit that the main thing giving me energy to push on from Kigali to Bujumbura (by myself, just like the rest of the trip) was that I had just read Strength in What Remains by Tracy Kidder. This brilliant book tells the appalling and inspiring story of Deogratis Niyizonkiza (“Deo”), a Burundian medical student who escaped a massacre in Burundi’s civil war in 1993 and ran – by himself, through the mountains, with only the clothes on his back – into Rwanda, which was on the brink of genocide. When the Rwandan genocide broke open in April 1994, he ran back into Burundi, which had quieted down slightly, but not enough so that he felt safe. Suffering from severe post-traumatic stress and nearly starving, Deo escaped with the help of a connected friend on a flight to New York with a business visa (for “selling coffee”). It was pre-9/11, and he got into the city with the help of a French-speaking Senegalese baggage handler, who helped show him how to squat in crack houses in Harlem. He spoke not a word of English, had only $200, and slept in abandoned buildings and Central Park while he delivered groceries for $15 a day. Within a year, though, he managed to end up at Columbia University (for the sake of brevity I won’t go into how, but do read the book), and ended up back in Burundi in the 2000s setting up a clinic near Bujumbura.

I couldn’t help but notice that Deo took an almost geographically opposite journey from yours truly, in almost opposite circumstances. (One coming from one of the least privileged backgrounds on Planet Earth, and the other from one of the most – even if I ain’t no senator’s son, naw.) In fact, the place where he slept in Harlem – near 125th Street and Malcolm X – is right around the corner from the place I called home for all of last year. (That is not to suggest that the geographic symmetry would give me any kind of a better insight into Deo’s experience; if anything, it shows how much more politics, economics and social status matter to experience than place does.)

Anyway, I figured (on a purely personal level, of course) that it would be a poetical travesty for me not to visit Burundi after having made it as far as Kigali. Plus, I happened to have a friend to crash with in Bujumbura. Plus, Kidder made Burundi sound impossibly beautiful, even as it was the backdrop for unspeakable violence during Deo’s exodus. I had to see it.

So on the sunny morning of November 30, after a week of generous expats in Kigali (more on that later), I hopped on a little Bujumbura-bound bus in a small garage across the street from the upscale Union Trading Center mall in Kigali. A little more than an hour later, we had passed out of Rwanda and into Burundi. There began a landscape of dizzying heights and greenery, ragged poverty, windswept mountain ridges, rice paddies nestled in mountain valleys full of farmers, villages clinging to life on treacherous slopes, golden light, blue skies and towering cumulus clouds that mimicked the contours of the land. There were mountains folded onto each other, secret hollows and clear streams with bananas, eucalyptus and conifers growing next to them. The people were the poorest-looking I’d seen in East Africa; many looked tired, underfed, and as though they only had one pair of patched and ragged clothes. There were plots of maize in the most improbably of places – in ditches between houses, on hillsides that looked steep or inaccessible.

Finally, the road spilled vertiginously out of the high mountains into the broad flat Great Rift Valley, where the northern end of Lake Tanganyika sparkled. On its far side were more mountains, shrouded in clouds, in eastern Congo. Sleepy, low-rise Bujumbura was scattered about the shore.

How can soil that has soaked so much blood be so beautiful?

Here is some very brief background: Burundi has hardly known peace since its liberation from a brutal Belgian colonial occupation in 1962. Like its northern neighbor, the population of the country is made primarily of two different groups, the Tutsi and Hutu. Differences between the groups existed before colonialism, but they were made immutable and classified as racial under Belgian rule. From 1959 onwards, political clashes in Burundi broke out along tribal lines, generating hundreds of thousands of refugees and hundreds of thousands of deaths. There was intermittent conflict until 1993, when all-out war broke. That war lasted until 2005, although some fighting continued until this year. In fact, as recently as April, 2008, a rebel group shelled the capital. But relative stability has reigned in 2009, and this year is being seen in peace-building circles as the most promising moment in Burundian history for a while.

While much of Burundi’s tragedy parallels Rwanda’s in its origins and dimensions, it never had a single episode that quite matched the scale of Rwanda’s genocide. Thus, no Hollywood movies, far fewer popular books (at least until Kidder’s) and much less American awareness of the country. The suffering, however, has been massive in its own right.

A billboard above Bujumbura's bus depot advocates against war.

I expected, after reading of Deo’s plight and being warned by some people who had been to Burundi in recent years, to feel ill at ease in Bujumbura. Maybe I felt OK because of my stupidity, but what I saw was a small neat city with a noticeable number of new-looking businesses. The affluent quarters have tree-lined cobbled streets. There are little cafes with wireless internet and a fancy lakeside restaurant called Bora Bora that, with its swimming pool and all-white-upholstered bar, looks like something out of Jay-Z’s “Big Pimpin’” video. Now, 99 percent of Burundians probably don’t even dream of such experiences, which are mostly available to the sizable expat crowd and other affluent people. I didn’t have time to investigate more humble quarters, and in contrast, the countryside looked tired and destitute. But I think I’d be incomplete not mentioning the existence of that other reality in Bujumbura. For better or worse, it was one I had a taste of.

Bus depots can often tell you something about a country. Like public transportation hubs anywhere, they bring together people of many classes and backgrounds. Bujumbura’s was quiet and normal feeling. I’ve been to N’Djamena, Chad and of course Beirut; both bear more visible scars of conflict, in terms of rubble and bullet holes.

What I will remember from Bujumbura: How weirdly athletic everyone is. I saw joggers in different neighborhoods during night and day; one day a group of people, whom I was told were from the immigration office, was jogging around with whistles, in a pack, in the afternoon. Just for exercise. I will remember the dearth of television programming on locally available channels: only music videos and propaganda clips of leaders trudging around villages, security detail in tow, taking part in some sort of community project or another, as bad, shrill marching band music played in the background. I’ll think of the bicyclists with impossible agricultural loads lashed to the backs of their bikes, leaning over their handle bars with the wind in their faces as they careened out of the mountains toward the city early in the morning. (They had the same look on their faces as bicyclists everywhere on thrilling downhill rides, recreational or otherwise.)

Most of all, I’ll think of the thunderstorms that came rolling in over the lake in the afternoon: the sky darkening as thunder rumbled and a cooling shower broke over the steaming city like a baptism. It made me feel exactly like the John Prine song, Mexican Home. (Apologies for my mangled transliteration of his south-Illinois/Kentucky drawl.):

Well it got so hot, last night I swear
You couldn’t hardly breathe
Heat lightning burned the sky like alcohawl
I sat on the po’ch, without my shoes
And I watched the cars roll by
While the headlights raced to the co’ner of the kitchen wall

Mama dear, your boy is here
Far across the sea
Waiting fo’ that sacred co’
That burns inside of me
And I feel a sto’m all wet and warm
Not ten miles away
Approaching my Mexican Home

Burundi sometimes calls itself the Heart of Africa due to its location just left of center and its undeniable heart-like shape. I sure hope that I can make another visit to this Sacred Core in a few years and see it well on its way to permanent stability. I visited it when peace was still fragile and new, and only for three days, but its beauty and potential made a lasting impression on me. Thanks for having me, Burundi. 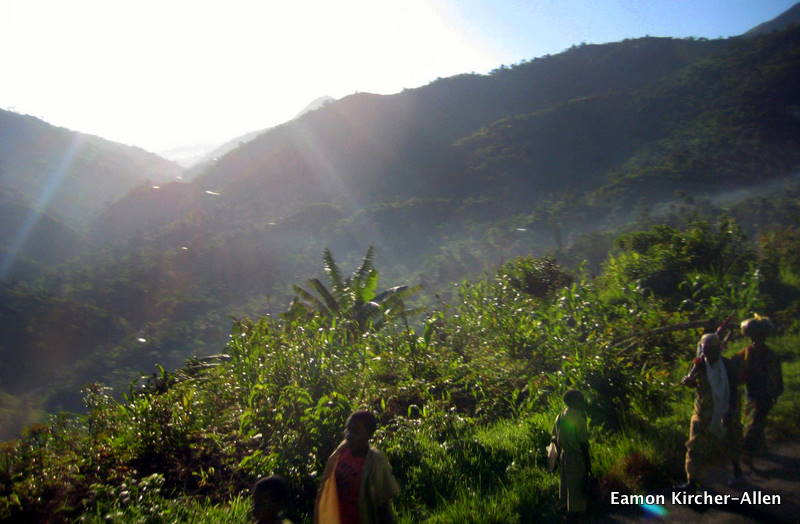 *Word to the wise: I did not attempt any real reporting in Burundi. Anyone who wants to go there for that purpose should do their own research about safety. In fact, that goes for anyone doing anything non-journalistic, as well. Do your research before you go anyplace where there’s conflict!