Note: I just saw that this article I wrote, reported from Dar es Salaam in January, had been published here on Global Post this last weekend.

But sexual exploitation of children is often the result of more ordinary pressures: poverty, disease and social disintegration.

In Tanzania, where trafficking of poor girls from rural to urban areas is a serious problem, these are the complex social issues that anti-child trafficking workers are trying to disentangle.

Desperation and families broken by AIDS are often more dangerous enemies than gangsters, says one of the most prominent groups trying to end child exploitation in the country, the Kiota Women Health and Development Organization (Kiwohede).

“The rings of the pimps are not coordinated in this country,” said Justa Mwaituka, Kiwohede’s executive director. That means individual trafficking rackets are relatively easy to break up. The underlying causes, however, appear harder to root out.

Consider Fatuma’s story. A slight Tanzanian girl who looks much younger than her 16 years, Fatuma sat on a battered wooden chair wearing a T-shirt and skirt in a Kiwohede office in Dar es Salaam this January. Through an interpreter, she told her tale. END_OF_DOCUMENT_TOKEN_TO_BE_REPLACED

I was sharing links to music that was popular in East Africa last year with my brother (find his alter ego here), and he asked me to put them in a list for him. That’s a good idea for my blog, I said. Only trouble is, having recently been endorsed as a blog that will make you “a better person” by the Scarlett Lion, the bar for new posts is now a bit high. A simple countdown of my faves will not suffice. Luckily, I have deep experience describing pop musical phenomena in a way that makes them seem like they have social significance (see, for example, my interview of K’naan).

So here’s a list of seven songs that I liked that got a good amount of play in East Africa in 2009, along with some context that explains why each shows something “deeper” about society. Enjoy. END_OF_DOCUMENT_TOKEN_TO_BE_REPLACED 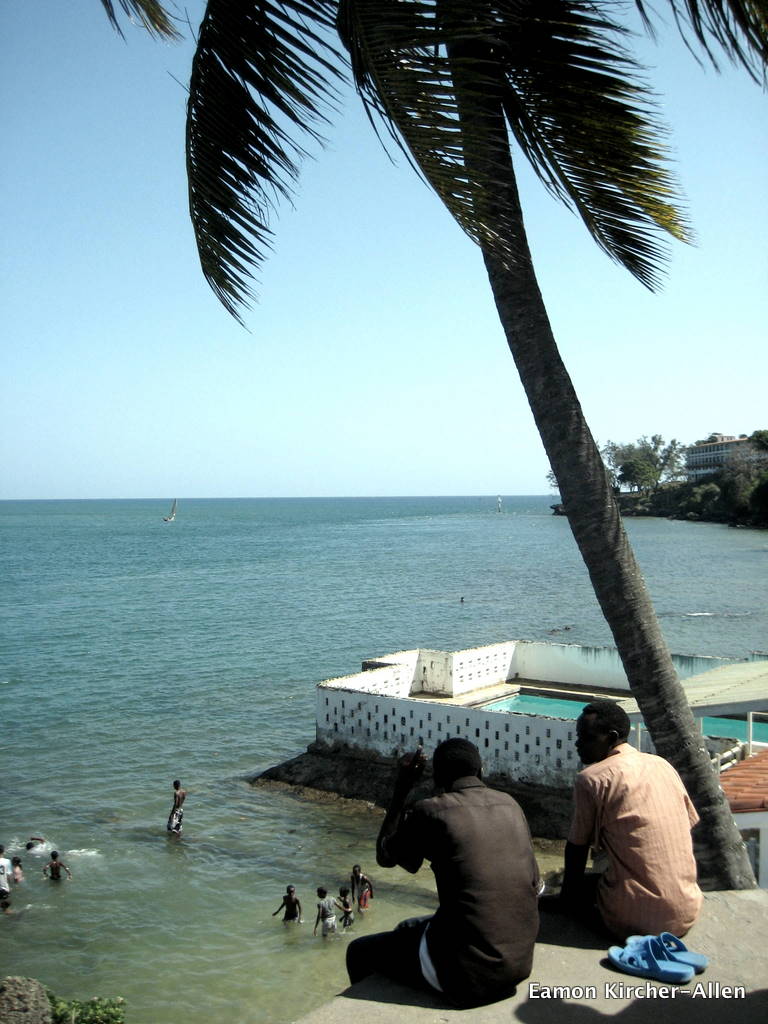 "Oh I thought I heard the old man say, leave her, Johnny, leave her..."

I head to New York City this evening. I have plenty of thoughts about freelancing, opportunities and career decisions, but I’m going to save those for another post. I also have a bunch of undigested material from East Africa, so readers of this blog may feel like I am still here for a few weeks (I haven’t even put up the Uganda and Kenya sections to my Ridiculous Roadtrip (TM) account. I’ve actually been without consistent Internet for about the last 10 days, which has kept me from writing and engaging more.)

But now, here’s something in the way of goodbye to this beautiful region, which now firmly occupies a large place in my heart. (When you’re about to leave a place, you somehow begin to remember only the good things about it; and those things loom larger and larger as the hour of departure draws near.)

In a nod to the conventions of blogging, here are the top 10 things I’m going to miss, each, about Tanzania and Kenya, the countries where I spent the most time during the last six months. (This reflects my personal experience, so if you think something’s missing – make your own list!) END_OF_DOCUMENT_TOKEN_TO_BE_REPLACED

During this epic 18 hour ride from Nairobi to Dar es Salaam (really, not recommended — do it in two days) we got a flat on the high savanna below Mt. Meru, and were detained in the Arusha police station for nearly two hours. There was a passenger who was supposed to get down there but refused; the police made everyone wait while they took statements from the bus company people and the passenger. I’m not even sure what happened in the end. My eyes were red and nerves frazzled by the time we pulled into Kariakoo.

But views of vast Africa through poetically dirty bus windows, like this shot about three hours south of Moshi, made it all worth it.

There’s been some interesting debate on the relevance of Julius Nyerere in the comments field of my blog (thanks to the input of the great TZ blog louder than swahili). On the subject, this week’s East African had a nice column about the ambiguity of Nyerere’s life and contributions, check it out. It’s hard to sum up Nyerere’s real contribution to Tanzania, but I remain impressed by his vision, which almost singularly among leaders of his era transcended tribe and the other constraints that colonialism foisted on the continent. I got more convinced of that after watching the documentary “Mwalimu: The Legacy of Kabarage Nyerere” at the Kenya Film Festival last week. (This film has almost no presence on the internet, which is unfortunately not too big of a surprise for something coming out of TZ.)

Not much! Except that a guy was selling posters of all three on a sidewalk near Kariakoo the other day. Also, check out the awesome Rambo bag distributed at the local vegetable market. 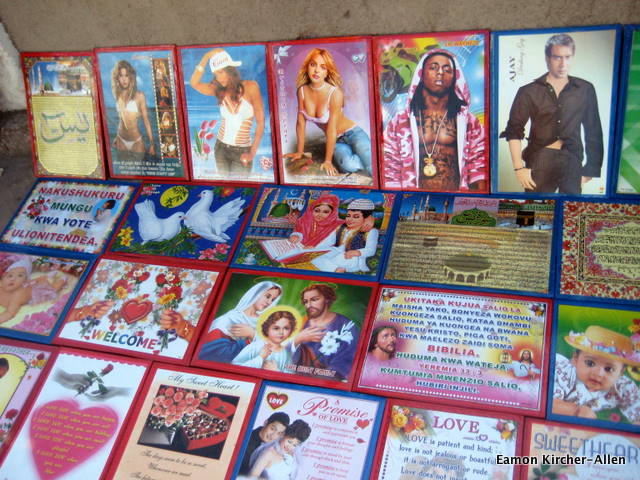 "You could love me or hate me/I swear to God it won't make me or break me..." 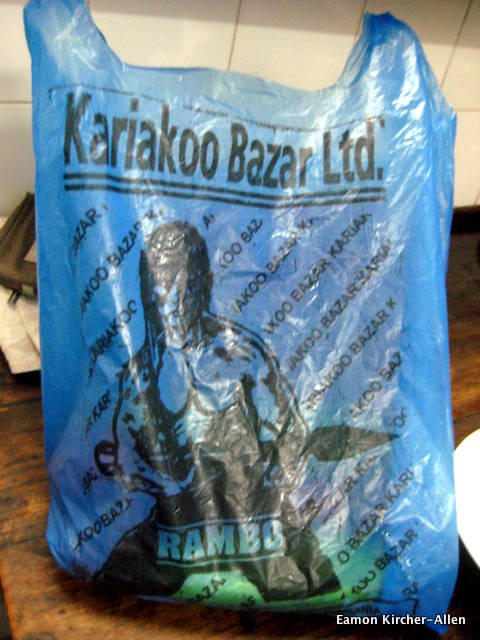 It's like they finished designing this bag and thought, "Crap, we didn't include any cpoyright violations. What can we slap on here?" 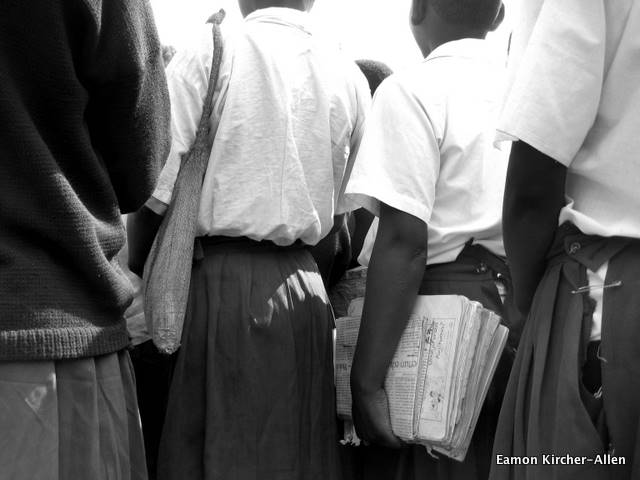 I took this shot while covering a story in Rungwe District, Mbeya Region, Tanzania. The girls are greeting a delegation of American schoolteachers who donated books to local schools.

If you’ve been in Tanzania, you’ve probably heard some foreigner say something to this effect: The reason that Tanzania lags behind in some areas is that the kids learn Swahili instead of English.

On the surface, this makes at least some amount of sense. It may be (let me rephrase: it is) completely unfair and the result of a history of imperialism and exploitation, but nevertheless ignorance of English is a huge handicap if you want to get keyed into the global economy these days. More than that: English, this crappy, haphazard mongrel of a language, represents power. Without it, you are weak, vis-à-vis the rest of the world. And many Tanzanians struggle with English. END_OF_DOCUMENT_TOKEN_TO_BE_REPLACED 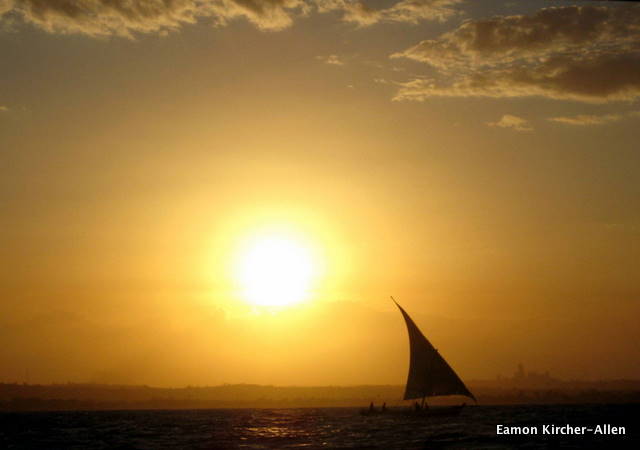 I love the dhow. It’s the culprit behind all the rich, centuries-long cultural mixing from Tanzania to Yemen to Iran to India. And I love the fact it still coexists with those tall buildings in the background, which are somewhere north of Dar es Salaam.